A bag valve mask, abbreviated to BVM and sometimes known by the proprietary name Ambu bag, is a hand-held device used to provide positive pressure ventilation to a patient who is not breathing or who is breathing inadequately. The device is a normal part of a resuscitation kit for trained professionals, such as ambulance crew. The BVM is frequently used in hospitals, and is an essential part of a crash cart. The device is used extensively in the operating room to ventilate an anaesthetised patient in the minutes before a mechanical ventilator is attached. The device is self-filling with air, although additional oxygen (O2) can be added.

Use of the BVM to ventilate a patient is frequently called “bagging” the patient.[1] Bagging is regularly necessary in medical emergencies when the patient’s breathing is insufficient (respiratory failure) or has ceased completely (respiratory arrest). The BVM resuscitator is used in order to manually provide mechanical ventilation in preference to mouth-to-mouth resuscitation (either direct or through an adjunct such as a pocket mask). The fullform of AMBU is Artificial Manual Breathing Unit.

The bag valve mask concept was developed in 1953 by the German engineer, Dr. Holger Hesse, and his partner, Danish anaesthetist Henning Ruben, following their initial work on a suction pump.[2] They named their resuscitator Ambu bag, and then formed their own company, also called Ambu, to manufacture and market it, starting in 1956. This position as first to market has led to the name Ambu becoming a generic trademark, with bag valve masks from any manufacturer being referred to as ‘ambu bags’.

Part 1 is the flexible mask to seal over the patients face, part 2 has a filter and valve to prevent backflow into the bag itself (prevents patient deprivation and bag contamination) and part 3 is the soft bag element which is squeezed to expel air to the patient

The BVM consists of a flexible air chamber (the “bag”, about the size of an American football ), attached to a face mask via a shutter valve. When the face mask is properly applied and the “bag” is squeezed, the device forces air through into the patient’s lungs; when the bag is released, it self-inflates from its other end, drawing in either ambient air or a low pressure oxygen flow supplied by a regulated cylinder, while also allowing the patient’s lungs deflate to the ambient environment (not the bag) past the one way valve. 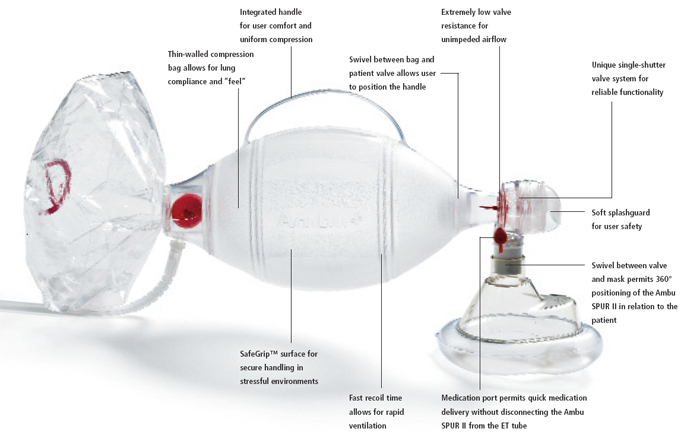 Bag and valve combinations can also be attached to an alternate airway adjunct, instead of to the mask. For example, it can be attached to an endotracheal tube or laryngeal mask airway. Often a small HME filter (Heat & Moisture exchanger, or humidifying / bacterial filter) is used.

A bag valve mask can be used without being attached to an oxygen tank to provide air to the patient, often called “room air” in the U.S. Supplemental oxygen increases the partial pressure of oxygen inhaled, helping to increase perfusion in the patient.

Most devices also have a reservoir which can fill from an oxygen source during the patient expiratory phase (a process which happens passively for patients in respiratory arrest), in order to increase the amount of oxygen that can be delivered to the patient to nearly 100%.

Bag valve masks come in different sizes to fit infants, children, and adults. The mask size may be independent of the bag size; for example, a single pediatric-sized bag might be used with different masks for multiple face sizes, or a pediatric mask might be used with an adult bag for patients with small faces.

Most types of the device are disposable and therefore single use, while others are designed to be cleaned and reused.